After almost a week of shows and false starts on Thursday I had a sweep. By Thursday evening I was having regular moderately strong surges. I sat on the ball and watched comedy and the surges got stronger and closer together so we called our doula (and friend!) Hayley. She came round and I got in the birth pool. I laboured there for a few hours, the surges were very close together and strong but not painful due to my hypnobirthing. We called midwives who then intermittently checked on foxs heart rate and my bp. Then as we thought things might be really happening it all stopped about 6am. I was so upset and disappointed after being up all night, midwives left and so did Hayley and I was told to try rest. The surges started up again about 8am but they were 5 mins apart. I let stew sleep til 1pm and then he took ember out for lunch and shopping whilst I had some time alone at home, I had a bath and watched tv – all the while having strong surges around 5 min apart. 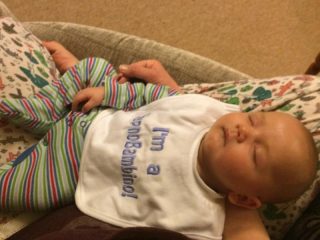 At around 4pm I text stew asking him to come home as surges were getting very intense. When him and ember got back they filled the pool and rubbed my back etc. I got in the pool about 5:30pm and Hayley arrived about 6pm. Stew took ember off to watch TV and Hayley sat with me and supported me through my surges. They were becoming very intense but my hypno breathing was getting me through. I kept saying to Hayley that I was bored and she just kept telling me to rest. I hate staying still so this was the biggest challenge of Hypnobirthing for me!(  I’m used to keeping busy but obv I needed to keep my mind completely still and relaxed so My uterus could work). At some point the surges became crazily intense and I needed to really listen to Hayley – she told me to go into the surges rather than away from them, her saying this every time really helped me, although it took everything I had I mentally pushed towards and into them imagining them as rolling waves rather than running from them. Then I think they were coming every 3 min or so and I suddenly felt a vague need to push during a surge, I told Hayley and she suggested it would be a good time to call midwives and went to ask Stew to. 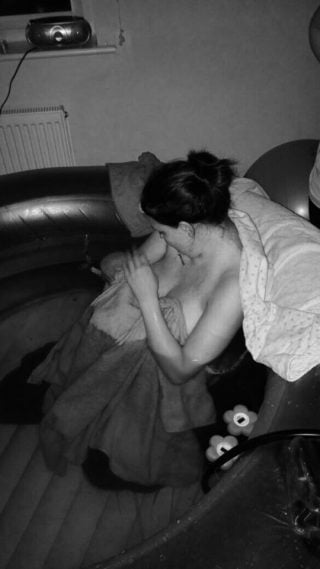 When she came back I was having another surge and my waters broke – Hayley checked it all and reassured me it was clear. Pretty sure it was the next surge that his head was there as Stew was still on the phone to the midwives! I was trying so hard to do slow breaths but my body was taking over and I found it incredibly difficult to slow things down! I was facing Hayley at the edge of the pool squatting and his head was coming out but my body suddenly told me to move my hips forward – this involved leaning back but obviously there was only water behind me – so I just remember asking Hayley to hold onto me as I leant back – she did and reassured me she wasn’t going to let me go! So his head was out! I looked at Hayley and said what’s going to happen now and she said he’s turning around and it felt so weird haha! She told me next surge he will just come out and you can reach down and pull him up to you, and that’s exactly what I did!

The cord was really short so I was in a pretty uncomfortable position waiting for the midwives but he latched on right away and was so calm and alert. He didn’t cry at all. Obviously the ambulance men arrived right away (2 sets?!) as when midwives aren’t present you need to call ambulance but they just said hi then left us to it. Midwives arrived about 25 min later and tied the cord as I decided Fox had had all the blood and I couldn’t really move lol! Placenta came on its own when I got out and went to the loo. It was a seriously intense experience but I wouldn’t say it was painful at all just an extremely crazy strong sensation.

I totally couldn’t have done it without Hayley she was so calm I didn’t feel worried there were no midwives and her words made so much sense to me as to what I needed to do in my mind to have such an awesome experience.